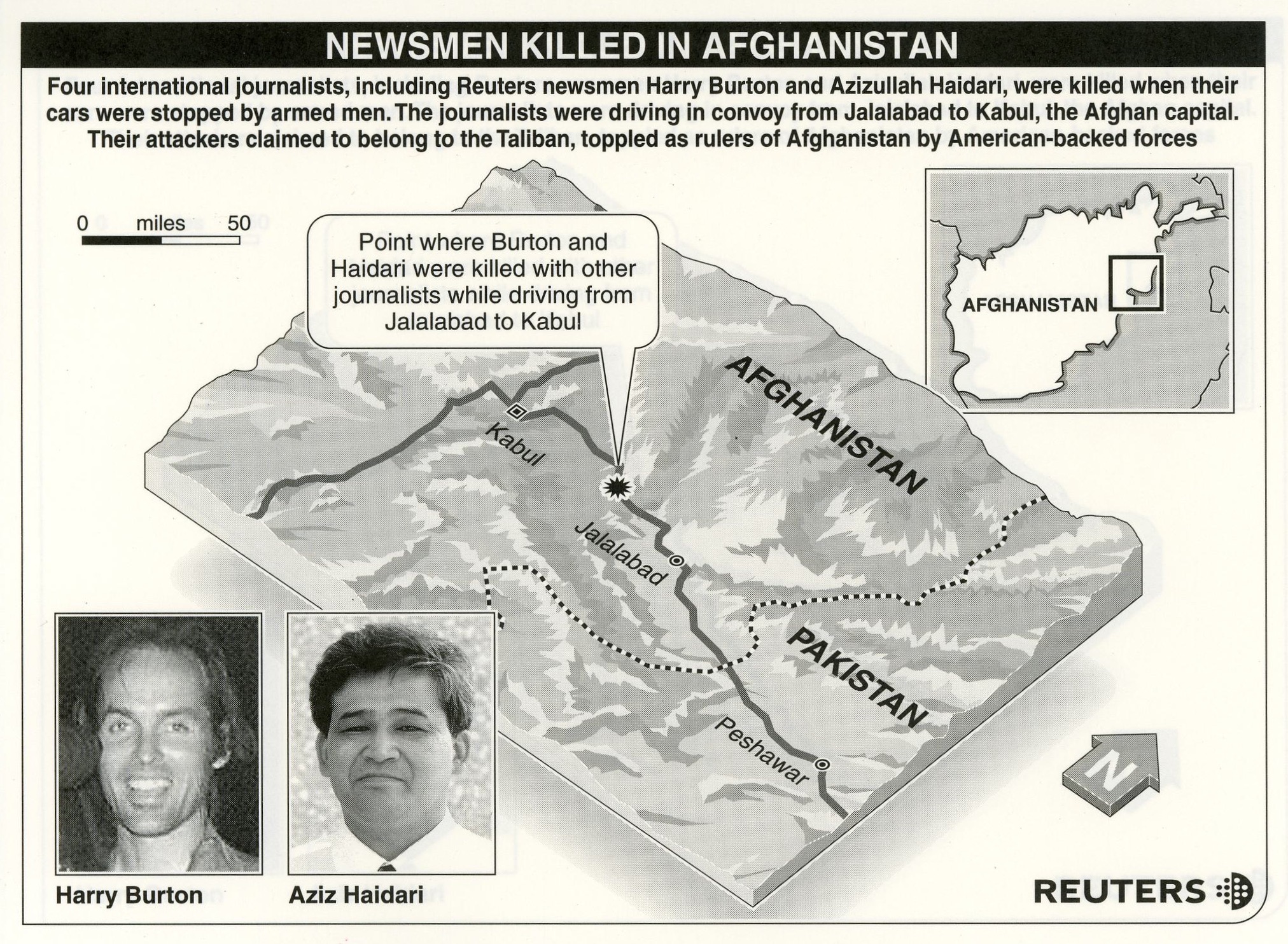 It was 20 years ago today and I was visiting my mother’s home in New York between reporting trips to post-9/11 Pakistan and Afghanistan. Amid several forgettable reports, CNN announced that four journalists had just been kidnapped in the mountains of eastern Afghanistan. They were abducted on the dusty road up the Kabul River Gorge, the same dramatic countryside I was looking forward to driving through to the Afghan capital in a few weeks. Maybe that route was not safe, I thought.

Several hours later, the details started coming in and they were even worse. The four had been shot dead by Taliban remnants as an eight-car convoy of western journalists twisted through the narrow valley that generations of Afghans have used for ambushes. When the announcer named the four victims, one of them was an energetic photographer I had worked with only weeks before. Aziz Haidari was an Afghan refugee living in Pakistan and eager to get back to the city of his birth for the first time since 1983. And now he was dead.

Also killed with Aziz was Harry Burton, an Australian cameraman for Reuters who had come to cover the 2001 defeat of the Taliban after several frontline assignments closer to his home. Both were 33 years old. The gunmen also stopped a second taxi with Maria Grazia Cutuli of Italy’s Corriere della Sera and Julio Fuentes of El Mundo in Spain. They were shot dead on the spot too.

It’s been just over 20 years since Aziz and I worked in Peshawar, meeting both refugees from and supporters of the Taliban. Sometimes there were even Taliban themselves, slipping across the border amid the confusion in the weeks before Kabul fell to anti-Taliban forces in early November. Fluent in Afghanistan’s Dari and Pashtu languages and Pakistan’s Urdu, Aziz worked as much as an interpreter for us Reuters text journalists as a photographer for Reuters.

Aziz’s name came up recently when John Schults, a former Reuters photographer in Paris who lives only a few blocks from my own home, asked me if I knew him. Now retired like me, John met Aziz on a hazardous environment course shortly after I had left him in Peshawar. “Aziz stood out in the group as he was preparing for an upcoming assignment in Afghanistan,” he told me. “In table conversation, he expressed the love of Afghanistan, its people, its geographical beauty, its history of conflicts.”

John learned of Aziz’s murder from Dan Chung, another Reuters photographer on the course, who said he wanted to inform him before it hit the television news. “We spoke for several minutes, recalling our recent memories, the energy and enthusiasm of our friend Aziz. A tearful moment,” he said.

I never made it up that spectacular gorge, taking instead the safer United Nations flight when I went to Kabul in late December. Aziz would have enjoyed seeing his hometown again, and probably also the heady initial years after the Taliban left it. Where would he be now that the Taliban have returned?