The foreign press corps' favourite watering hole in apartheid-era Johannesburg was a bar that began as a gold rush miners' shack, became a more upmarket bar and restaurant and then, as businesses fled the urban violence of downtown Jo'burg for the relative safety of the city's northern suburbs, reverted to little more than a shebeen. During the glory years, segregation (professional segregation, that is) extended to the econ/gennews staff. 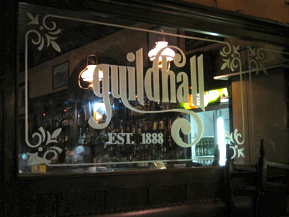 In the days of South Africa under apartheid, the first place to look for a member of the foreign press corps was a watering hole in central Johannesburg referred to simply as The Guildhall (photo). And you’d be rarely disappointed.

The Guildhall was a throwback to Jo’burg’s early days - starting off as a simple shack built in 1888 alongside a muddy, ox-wagon staging point just two years after the discovery of gold on the Witwatersrand.

By 1913 it had evolved into the building in which it remains today on the corner of Market and Harrison streets across from the monolithic City Hall. Singularly, in a city bedevilled by archaic drinking laws, it featured a large downstairs bar which opened directly on to the street and was entered through Wild West-style swinging half-doors.

But this was a rough-and-ready “public” bar and the foreign press lair of the 1960s, 70s, 80s was the upstairs Bar and Restaurant, entrance to which was gained via a steep flight of stairs that witnessed many a painful exit in their time, not all of them accidental.

The promixity to the office was always a factor

It featured a diminutive bar, presided over in the glory years by a lust-inducing Irish lass called Mae, a narrow (rarely used) balcony and wood panelled walls that oozed nicotine and history. Dominating the bar area was a large photograph of what had become the Market Square outside, taken in the early 1900s and featuring the Reuters office that had opened in 1895 only a dozen yards or so away.

The proximity to the office was always a factor. The Guildhall established itself as THE foreign press centre in the 1960s when the bureau chiefs of Reuters, AP and UPI gathered there every morning they were in town (if not available, try the Meikles Hotel or Quill Club in Salisbury, Rhodesia, now Zimbabwe) and remained for most of the rest of the day, joined by colleagues from The Daily Telegraph and others by lunchtime.

Reuters’ general news operation in those days was in two poky rooms in the SAPA offices a few doors along Harrison Street, where filing to London was done on a laborious quarter-speed circuit, while the economic services had set up shop in the then-glitzy Glencairn skyscraper a bit further up Market Street.

For a while, the econ/gennews apartheid meant the Guildhall remained the bailiwick of the real news people, but this broke down when editorial moved into Glencairn in the 1970s - although not enough to stop one senior London figure showing his dislike of a local econ reporter infringing on his territory by pouring a pint of beer over him in a front of a prominent city banker.

Castle lager and Rothmans cigarettes, packs of 30 in slim cardboard cases which served many a correspondent as a note book, were the staples. Visitors arriving in Johannesburg often found it easier to be dropped off at the Guildhall than to try and find the office. In the days before mobile phones, the number was as well known to many a Reuter spouse as it was to a newsroom seeking absent colleagues.

Over the years, the Guildhall changed hands several times. In the 70s and 80s, with a proprietor of Italian descent, the inner restaurant behind etched-glass doors was a good place to eat - a bit more up-market than the rolls and chips served at the bar and favoured by the stalwarts who particularly lusted after Mae.

By the late 80s it was in the hands of some ex-Rhodesian special services types and pride of place in the dining room was given over to a huge portrait of Cecil Rhodes “liberated” from a school of the same name in Bulawayo. By the 90s, with most news offices joining the business flight from downtown Jo’burg to the northern suburbs, it was in serious decline, the downstairs bar reverting to little more than a shebeen - not far off what it started as.

Peter Gregson was posted to Johannesburg three times in the 1970s, 1980s and 1990s, and was also chief correspondent, Southern Africa based in neighbouring Zimbabwe from 1983 to 1987. The southern Africa postings, which embraced other renowned watering holes such as the Cape Town press club and Sandro’s in Harare, were interwoven between stints in Singapore, Hong Kong, Peking, Lagos, New York, Washington and London. ■