Although it had a celebrated history the old National Press Club bar was no place to look at but it was handy for Reuters' Washington bureau a few floors below in the same landmark building. And anyhow, the main attraction was the good talk, big drinks, occasional argument and friendly fisticuffs. It wasn't the only show in town, though. The Class Reunion, the Old Ebbitt, the Dubliner, the Tune In and others competed for the attention of the US capital's pen and pad crowd. 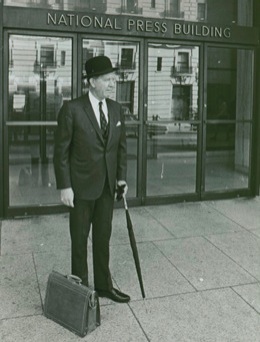 In the good, or bad, old days of Washington journalism, the headquarters for the after work crowd of newsies was the old National Press Club bar on the 13th floor of the National Press Building where Reuters’ Washington office was located.

The old bar was a smoky, dark wood joint with cheap drinks, decent cheap food, and on the stained walls cheap imitation Bruegel prints - Dutch paintings that had no relation to Washington or any other place in the United States. But the guys - gals came later - went there for the main attraction: good talk, big drinks that led to an occasional argument and friendly fisticuffs among or with drunken Canadians.

The bartenders were pros and funny, with the master wit being Sam Dominick, a lanky, slow-talking southerner with a quick retort.

Originally it was called the Members Bar. Members translated to men only since at that time only men could join the club. Reuters’ bureau chief Pat Heffernan* (photo), truly a legend in his own lifetime and later honored by the British government, insisted all Reuters men join.

Well, one day Sarah McClendon, a feisty veteran scribe for Texas papers, decided to integrate the men only hang-out. She walked up to the bar, put her foot on the brass rail and ordered a drink, whereupon barman Dominick looked down on her and said, “Sarah, you'll have to leave, we don’t EVEN serve ladies in here.” She stomped out but, as time marched on, several years later the club was integrated and women were admitted in 1971.

Eventually the old long bar, where shots were lined up ready for the lunch time rush, was torn apart in a complete renovation of the club. It was replaced with a circular bar that has all the, ugh, appeal of a Marriott downtown lounge and is rarely the primary meeting place for the pen and pad crowd.

Newsies later drifted to a bar called The Class Reunion which became the hang-out of The Boston Globe, The Los Angeles Times, The Washington Post, Reuters and others.

The Old Ebbitt, which served the best roast beef sandwiches in town, was also a stopping off spot near the National Press Building, until the owner refused to pay federal taxes and the revenooers shut it down and put it up for auction. The auctioneer started selling off the ancient steins that lined the walls individually - $10 here, $10 there - and then the walrus and tiger heads behind the bar one by one, when Stuart Davidson, heir to the Underwood typewriter fortune and owner of Clyde’s saloon in Georgetown, piped up and exclaimed, “I’ll give you $11,200 for the whole place”.

“Sold,” said the auctioneer. Davidson then shouted to the other stunned bidders: “Now get out of my f****** place!” Davidson and ex-bartender John Latham later built Clyde’s into a hugely successful chain. They moved the Old Ebbitt to a new location, a vast new restaurant around the corner in front of the US Treasury with old wood and the big walrus head on the wall. It lacks the run down quaintness of the old place though.

The Dubliner near Union Station, which still stands, is a watering hole for Capitol Hill types and in the 70s was the only place in town to get a decent glass of Guinness on tap, shipped over in kegs from Ireland. You can’t rush liquid coal dust so those in the know would order “a slow pint”, which ensured it was poured with unhurried reverence and not much faster than cold molasses, but you could return to the office and get back again by the time it was ready. Lunch hours were longer then.

The Capitol Hill crowd also go to the Tune In - the divest of dives on the hill with animal heads on the wall and food you have to take a chance on eating. But of all the old newsie joints, the original bar of the National Press Club, 100 years old in 2008, was tops.

Eric Sevareid, veteran CBS commentator, summed up what the National Press Club means to its members when he called it the “sanctum sanctorum of American journalists”. Speaking at the club to mark his retirement, he said: “It’s the Westminster Hall, it’s Delphi, it’s Mecca, the Wailing Wall for everybody in this country having anything to do with the news business; the only hallowed place I know of that’s absolutely bursting with irreverence”.

*John W. “Pat” Heffernan was the only foreigner to be elected president of the National Press Club. It was in the 1960s and was so unprecedented it took a special Act of Congress to permit a non-US citizen to head a corporation holding a liquor license.

President Lyndon Johnson and his successor, Richard Nixon, as well as Harold Wilson, British Prime Minister at the time, congratulated him.

Johnson referred to the burning of the White House by the British Army in 1814 when he wrote personally to Heffernan, an Englishman of Irish descent: “Seven score and fourteen years ago, your fathers brought forth on this continent a conflagration. In short, they burned down the house I am now living in. I think there is no more heartening evidence of our accepting bygones as bygones than your election as President of the National Press Club.”

Michael Posner was a working Washington reporter for half a century, first for UPI and then as a Reuters correspondent from 1972 to 1997 when he covered the Capitol Hill beat, US politics, presidential election campaigns and presidential trips. He later wrote for a Washington magazine group, National Journal’s Congress Daily, and over the past three decades has covered every major story in the US Senate and House of Representatives. He died on 11 March 2011. ■