Toiling in the Afghan vineyard

It tasted like turpentine but local wine - yes, Afghan wine - was on offer for a succession of correspondents visiting Kabul in the days before the Taliban. The Intercontinental hotel, a watchpost on a hill and a comfortable refuge from the dust of the city, was a haven, a nest of spies and a hang-out for propagandists. 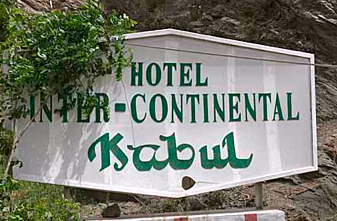 Afghan wine? An oxymoron, surely. Actually, they made two: one was red, the other redder. Both were undistinguished. Well, not so much undistinguished as almost undrinkable. Almost. Little else was available, so the local wine it was.

Wine, labelled Vino Castellino from a vineyard planted in the 1920s by Italian engineers, was not the only reason to look forward to trips to Kabul. Bacon, unavailable in neighbouring Pakistan, and cheese, equally hard to find, were also on offer at the Intercontinental, pictured, a luxury hotel that opened in 1969 on the north-western outskirts of the Afghan capital.

Reuters had no permanent presence in Afghanistan in those days so the country was covered from Pakistan. To get there, first you took a taxi from Rawalpindi, the garrison town on the Grand Trunk Road through the North West Frontier, through Peshawar to the Khyber Pass - Rudyard Kipling’s “sword cut through the mountains” that once was part of the ancient Silk Road as it traversed the southern foothills of the Hindu Kush - past monuments to actions in the three Afghan wars contested by imperial India against warrior tribesmen, and regimental insignia carved into roadside crags. At the border crossing, Torkham, you then picked up an Afghan taxi for the ride via Jalalabad through the tribal badlands of eastern Afghanistan. As correspondent in Pakistan also responsible for covering Afghanistan, I followed that hazardous trail several times.

Afghanistan, a major piece on the 19th century British and Russian Great Game checkerboard, straddles the political fault line where the Middle East, Central Asia and South Asia converge. Long before the Soviet occupation and the advent of the Taliban, under the free-wheeling monarchy of King Zahir Shah it was a fairly liberal Islamic country: the wine was proof of that, and more besides. Hard to imagine now, some young urban Afghan women wore miniskirts, not burqas. Western travellers, often in VW camper vans, on the hippie trail of self-discovery to Kathmandu thronged around Chicken Street, centre of flophouses, marijuana, rugs, lapis lazuli and shaggy goatskin Afghan coats. They never ventured up to the Intercontinental, a well-sited watchpost on a hill and a comfortable refuge from the dust of the city for a succession of Reuters correspondents and more well-heeled business visitors to Kabul for the next 10 years. For those covering the Soviet occupation, when first Bernard Edinger from Paris and then Bob Evans from Moscow arrived, the hotel was a haven, a nest of spies and a hang-out for propagandists. There was no real alternative. The Kabul, the only other hotel in the city with a claim to even a single star, had been no-go since the US ambassador was kidnapped and died in one of its rooms in a shoot-out between his abductors and would-be rescuers.

At the Intercontinental the spies and propagandists were not that obvious, or they were so obvious that they were laughed out of the lobby - as was one American who predicted daily that the whole country was about to rise in revolt and the Russians cut and run. Indian diplomats and an occasional East European posing as a journalist came by but Soviet diplomats and officials themselves kept well away from the hotel, and if the intelligence services patrolled the corridors, listened to conversations at the bar or bugged the rooms, they kept under very deep cover.

More obviously present were local party informers planted among hotel employees. Information exchanges did take place - in the relative security of the basement sauna. A rare Reuters scoop, Evans recalls, came from the Libyan ambassador encountered by chance in the cool room in February 1980, a towel wrapped round his waist. It was something to do with quarrels within the new Afghan leadership that the Soviets had put in place.

The hotel’s balconies afforded magnificent views over the city, enabling early-rising reporters to make a quick check on the situation in the city and on a fortress within easy sight that had been taken over as a base by the Soviet army. Evans woke up one morning to hear VOA on his short-wave radio reporting that there was heavy fighting across the Afghan capital involving Soviet tanks and thousands of anti-communist fighters. From his balcony, a totally calm Kabul stretched out serenely in the sharp winter sunshine.

Tom Heneghan, arriving at the Intercontinental in 1986, found the hotel so empty that he had to search ground floor offices to find someone to check him in. Later in the restaurant, remembering the local wine from a visit a decade earlier, he asked if it was still made, and minutes later a waiter returned proudly bearing a bottle of Castellino. “It tasted like turpentine,” he recalls.

A year later, Patrick Worsnip checked in to a still somnolent Intercontinental. On a hook behind the door of his room he found a 12-month-old laundry bill in Heneghan’s name, apparently hopefully awaiting his return.

In June 2011 the hotel was all but wrecked in an attack by a Taliban insurgent suicide squad and a blasting from a NATO helicopter.

Barry May covered Afghanistan from his base in Pakistan from 1971 to 1973. He now lives in London. Bernard Edinger still lives in Paris, as does Tom Heneghan. Bob Evans is in Geneva, Patrick Worsnip, New York at the time of writing but later back in the UK. ■