The heat in the Reuters kitchen 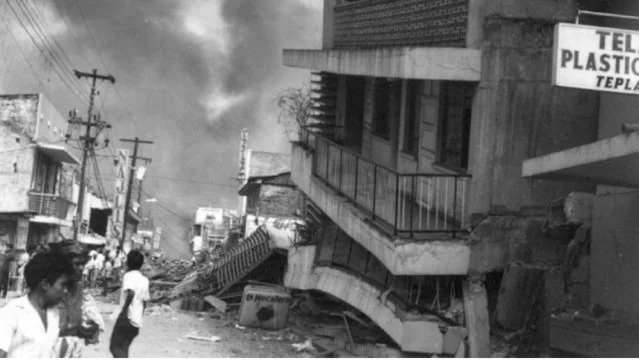 An earthquake devastated the Nicaraguan capital Managua on 23 December 1972, killing 10,000 people and making 300,000 homeless. Circling over the city before landing, the Pan Am pilot announced: “To your right you can see Managua. The city centre has been flattened.”

When I was growing up in the 1940s, the American song “Managua Nicaragua is a beautiful town” was a big hit and I dreamed of visiting the place one day. Suddenly there I was. I flew in from Mexico City and spent Christmas Eve sleeping among the homeless in a park under the stars, using my suitcase as a pillow. A Roman Catholic nun with a group of orphans said: “Tonight we feel closer to the baby Jesus because like him we could find no room at the inn.”

On Christmas Day I walked around the city, the humid air heavy with the stench of corpses buried under the rubble and clouds of dust swirling around me. Like a sumo wrestler, a lone bulldozer strained against the wall of a collapsed building. Fallen electric cables snaked along wrinkled pavements littered with debris.

I talked to survivors including Hope Portocarrero Somoza, the elegant American wife of the Nicaraguan dictator General Anastasio Somoza whose white mansion was reasonably intact. She told me to walk into her kitchen anytime for a glass of water or something to eat. In her backyard a dozen women bustled about preparing meals, mainly rice and beans, for the homeless.

A British diplomat looking after the ambassador’s deserted residence was glad to see me. He led me to the garden and a tree under which he had stashed a bottle of whisky and to another tree where he retrieved a bottle of soda water and two glasses. “Sorry we have no ice,” he said as he poured me a drink.

On a crackly shortwave radio we listened to the BBC which erroneously reported that power had been restored in Managua. Frowning, he muttered: “Now London will be wondering why they haven’t heard from me.”

I made my way to the post office plaza. The telecoms building was shattered but I spotted a cable leading from a ground floor window to a clump of trees where military engineers were rigging up a telephone. They let me use the only phone working in the whole city. I got through to the Reuters news desk in New York. “Give us everything you’ve got and lots of descriptive,” the desk editor said.

The next day a long queue had formed at the makeshift telephone booth - local residents who wanted to tell worried relatives and friends abroad that they were okay.

Kyodo correspondent Hiroaki Idaka, a friend from Mexico, came along and said he had heard Japanese engineers were working inside the post office and might be able to give us a line to New York. As we picked our way through the rubble inside the post office a strong aftershock rocked Managua. We nearly collided with three men running down the stairs to get out of the building. They were the Japanese engineers.

Back to the public telephone queue where I was Number 32. When I finally got through to New York a harassed deskman said: “Sorry I can only take a few paragraphs. All hell has broken loose. Harry Truman has died.”

After dictating a fraction of the story that I had prepared, I slumped on a bench tired, hungry and dejected. Then I became more philosophical. The Nicaraguan earthquake had been the top story for a couple of days. Now it was the death of a US president who dropped the atomic bomb on Hiroshima and Nagasaki, killing 200,000 people and ushering in the nuclear age.

Truman once said: “If you can’t stand the heat, get out of the kitchen.” I stayed in the kitchen for 42 years.

Today I say to myself  there are tougher jobs in life - like working as a doctor or nurse on a pandemic frontline.

PHOTO: A street in Managua after the 1972 earthquake. ■